Not only providing gaming laptops with luxurious prices, Asus also note the segment of users who want a cheap gaming laptop. For this reason, GA502DU was born.
Entered ROG Zephyrus family, this gaming laptop has the thinnest body. What about the features and performance? Promising, consider the following review? 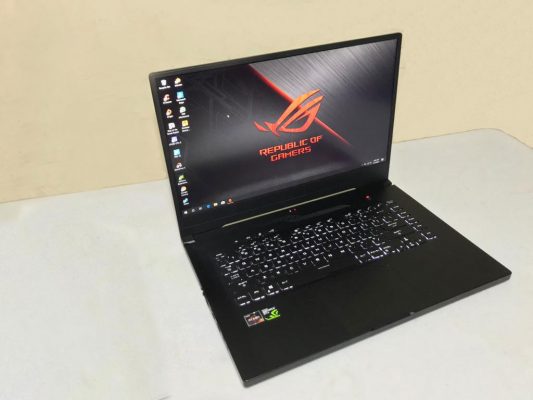 Not much different from the usual gaming laptop products, even similar to other ROG Zephyrus families, ROG GA502DU also adopts the same body.

ROG Zephyrus GA502DU is also one of the most portable gaming laptops on the market today. Besides having a compact body, the ROG Zephyrus GA502DU comes with a body thickness of only 20mm. While its weight is only 2 kg making this laptop not only easily fit into a daily bag but also very comfortable to carry around. 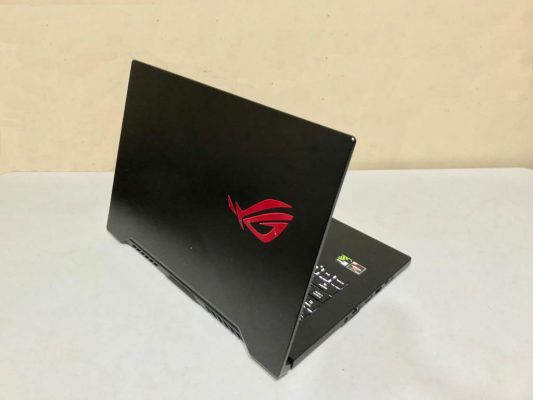 The overall dimensions of this gaming laptop are even smaller than its competitors. This is thanks to the use of NanoEdge Display technology. Coupled with a special cooling system, ROG Zephyrus GA502DU always perform optimally in all usage scenarios. Although dominated by plastic, the GA502DU looks tough with a solid chassis configuration.

Looking at the connectivity features, there is an ideal number of USB ports, plus a USB-C Display-Port 1.4 combo on the left. Unfortunately, Asus eliminates Card-Reader. Perhaps to emphasize that the ROG Zephyrus GA502DU is indeed made for gaming not professional needs.

In addition, Asus ROG also eliminates security features for biometrics such as fingerprints. We also did not find any webcan on this laptop, so as a result users have to buy a separate webcam, if you want to use this feature.

This feature ensures that this ROG laptop can still be connected to the internet and various wireless gaming devices. Want a more stable connection when playing games? ASUS also provides LAN ports for users who are concerned about connection stability. 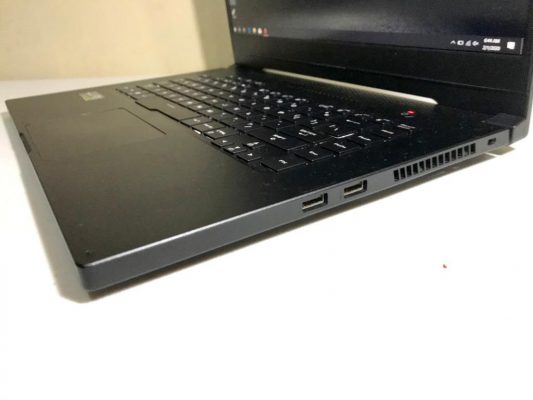 Switch we see on the keyboard and touchpad. This laptop offers a backlight with three levels of illumination. At the top of the keyboard there are separate power buttons, and 4 dedicated buttons that are positioned quite strategically on the top left. On the keyboard, Asus also immersed the N-Key rollover.

For the touchpad area, Asus makes it of a medium dimension, meaning that it is neither large nor too small. This is quite understandable considering that most gamers will definitely use a mouse compared to the touchpad. 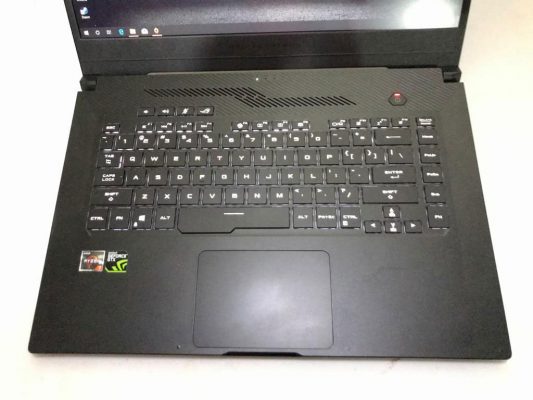 But unlike some of the other Zephyrus series, the touchpad surface is not added to the rubber texture, which makes it look more clean. But this is not a problem considering this touchpad also supports multi-gesture.

When trying to type, both the size of the keys and key-travel are very comfortable for long typing. Likewise on touvhpad which is still relatively smooth and responsive.

Also read: The Smartfren WOW Sweepstakes Program Continues in 2020, It's a Way to Follow!

ROG Zephyrus GA502DU carries a 15.6-inch screen with Full HD resolution. However, this laptop has a very compact body so it feels like carrying a 14-inch screen.

This is thanks to NanoEdge Display technology which allows the ROG Zephyrus GA502DU screen to have a very thin bezel. The size of the bezel is even only 6.2mm so that this laptop can come up with a screen-to-body ratio of up to 81%. 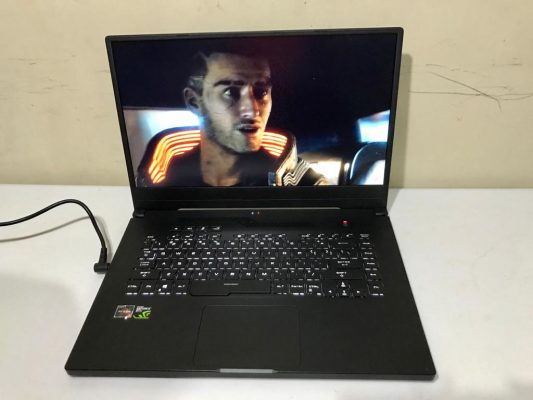 ROG Zephyrus GA502DU appears with a special screen for playing games. This laptop screen uses an IPS-level panel that has a better level of color reproduction than TN paneled screens.
The ROG Zephyrus GA502DU screen still looks fast thanks to the 120Hz refresh rate and the 3ms response time it carries. Coupled with the support of Radeon ™ FreeSync technology, playing games has become more comfortable thanks to the loss of tearing and stuttering effects.

AMD Ryzen ™ Mobile Second Generation 3000 Series are designed to provide the best mobile computing experience, powerful computing performance and battery life. This is to support the increasing needs of enthusiastic users and the ROG Zephyrus GA502DU is also one of the first laptops in the world to adopt the processor. 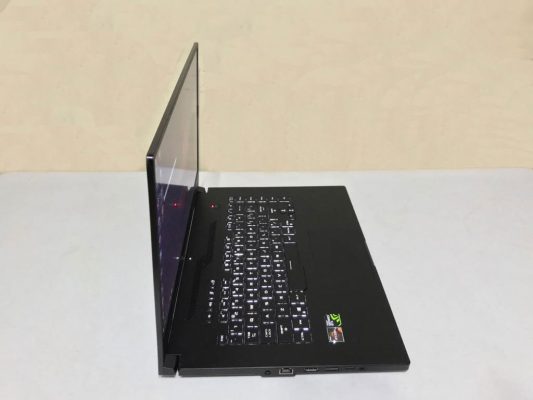 The ROG Zephyrus GA502DU is powered by an AMD Ryzen ™ 7 3750H processor which is a high-end processor from the AMD Ryzen ™ Mobile second generation 3000 Series, designed specifically for high-performance laptops.

This processor carries a configuration of 4 cores and 8 threads and comes with processing speeds of up to 4GHz so it is suitable for gamers or content creators.

Thus, the AMD Ryzen ™ 7 3750H processor has high performance and is more efficient than a mobile processor in its class with a TDP of only 35 Watt. This will provide maximum multitasking, editing, rendering and gaming performance

To support the processor to keep it cool, Asus also immersed a special cooling system cooling system equipped with Anti-Dust Cooling technology. The technology prevents dust and other particles from blocking the cooling system which can block the flow of air and cause component damage.

Adding to its portability value, the ROG Zephyrus GA502DU is equipped with a battery that lasts up to 7 hours of use thanks to the AMD Ryzen ™ Mobile Second Generation 3000 Series processor which is very power efficient.

Not only that, this gaming laptop also has AMD SenseMI technology, which provides up to 20% power efficiency compared to ordinary laptops.

Thus, the ROG Zephyrus GA502DU also holds the title as one of the gaming laptops with the longest battery life available today.

Thin gaming laptops with AMD Ryzen processors even have more battery life of up to 8 hours, on standard use.

With the integration of Ryzen 7 CPU performance and Nvidia GTX 1660TI Max Q, it is able to provide smooth Fps gaming (40fps ++) with better power efficiency. This latest generation graphics chip also carries the Turing architecture and has used GDDR6 memory so that it has better performance than the previous generation.

Combined with 8GB of DDR4 2400MHz RAM and PCIe SSD storage, the latest heavyweight games can certainly be played on this gaming laptop. 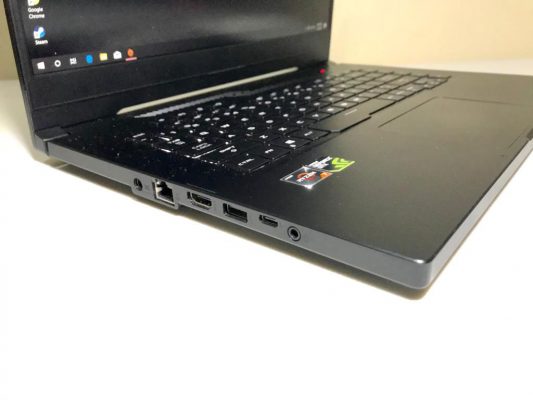 Asus eliminates the 2.5-inch SATA slot, which makes the laptop body still thin and light. But users can still add two m.2 PCIe slots to add additional memory. Likewise for the addition of additional DDR4 RAM memory that can be done on the available slots.

During testing both for video editing and gaming such as Fifa 20 and PUBG, this laptop was not an obstacle. However, the body still feels warm when used over 2 hours.

From the software side, not only has Windows 10 provided, this ROG gaming laptop has also been equipped with various applications in it. Call it Armory Crate software and supporting utilities such as SonicStudio, Game Visual, and GameFirst V.

Acer ConceptD 7 CN715-71: Laptop For Content Creators Who Are Ready To Invite Deadlines!

Wed Feb 19 , 2020
In addition to creativity and skill, qualified content creators also need the right tools to work to realize ideas that are fresh and without performance limitations. On this occasion, we tried a laptop unit that we were hands on to be able to answer all the needs of professionals. Falling […]