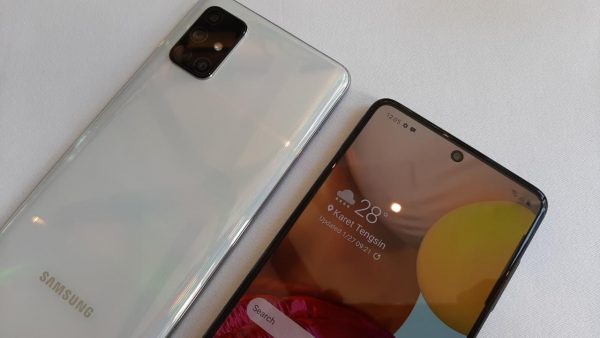 GadgetSquad.ID – At the beginning of 2020, Samsung can be said to directly step on the gas in the country. Because the South Korean manufacturer with “confident” presents not one but two mobile phones at the same time, to heat up the competition in Indonesia, namely Samsung Galaxy A51 and A71. The introduction of the two cellphones was also quite a scene, because Samsung was willing to bring in the Black Pink girl band who memorized the brand ambassador of the Galaxy A51 and A71.

Although reportedly had an incident, but in general the presence of Black Pink gives a different feel in the launch of the Galaxy A51 and A71 in Indonesia. Now forget about the excitement of Black Pink, because at the GadgetSquad editorial desk the Samsung Galaxy A71 is now ready to be explored further. Samsung Galaxy A71 itself is an advanced version of the Galaxy A70 series.

As an advanced generation, it is fitting that the Galaxy A71 comes with various features that are far more updated than its older sibling (A70). So, how awesome is the Samsung Galaxy a71, the following review.

The design
The design of the Samsung Galaxy A71 does not differ much from the previous generation Galaxy A series. The body looks polished with polycarbonate plastic with diamond motif. There are three color variants that can be chosen according to taste, namely Prism Crush Black, Silver and Blue. The glossy appearance does make the Galaxy A71 look glamorous and up-to-date, but on the other hand the body of this cellphone is easily seen dirty by fingerprints.

Apart from the easy-to-dirty appearance, it's lucky that the design of this cellphone is still fairly professional so it's still comfortable to hold. Well, one thing that feels when gripping the Samsung Galaxy A71, is the body that is somewhat thinner than the previous generation of Series A. Yup, the data obtained from the Galaxy A71 body only has a thickness of 7.9 mm.

Screen
Samsung Galaxy A71 has a 6.7-inch Infinity-O screen, edge-to-edge that has been embedded with Super AMOLED Plus technology. Besides being able to produce sharp colors, Super AMOLED Plus screen technology is one of the keys that makes the Galaxi A71 body become slimmer and lighter. Speaking of quality, as long as the screen tested with full HD + resolution embedded in the Galaxy A71, can provide a pleasant entertainment experience. This screen supports user activities, from playing online games, watching favorite live streaming, to multi-tasking. For matters of the screen, generally very satisfying.

Camera
Before reviewing the composition of the camera on this cellphone, Samsung presents something iconic on the Galaxy A71's imaging menu. Yup, Samsung carries a row of main lenses that are embedded in the rear body of the A71 like letters “L”. Related to its composition, the Galaxy A71 also presents a Quad Camera consisting of a 64MP main camera with f / 1.8, 12MP Ultra Wide which has a 123o lens angle, a Depth lens with Live Focus feature, and for the first time a Macro lens with a 5MP resolution. For selfies, there is a 32MP lens with a F2.2 aperture.

A71 camera configuration is promising, but what about the quality? During the testing process, the Galaxy A71's camera was able to produce photos that did not disappoint, both in poor conditions and in normal light. In addition, a complete supporting feature, makes the activity of capturing various moments using the A71 camera to be more colorful. Now when creating video content, the Super Steady feature is also available on the Galaxy A71, so that it helps capture moments when moving situations can be captured perfectly.

Game Features
Not only the standard menu and current features such as NFC technology, the Galaxy A71 also has other weapons that can make consumers, especially gamers fall in love. Galaxy A71 is already armed with AI Gaming Booster. AI Gaming Booster feature can adjust the performance of the game being played. Either on saving battery power, gaming performance, or balanced between the two so that it can be adjusted to the needs.

Furthermore, this phone has also been integrated with Discord. This feature allows users to connect with fellow gamers while playing certain games. Besides Discord also provides convenience via voice chat to interact without interrupting the process of playing games. A series of these technologies, making Samsung believe in placing the Galaxy A71 as one of the official cellphones at the 2020 Esports President Cup.

Samsung Galaxy A71 is said to have gone through a performance test process from Garena. In terms of experience, the Galaxy A71 has been tested to provide an excellent in-game experience due to the larger screen. Making it possible for players to zoom in on a number of HUD buttons such as jump, fire, or move.

Processor
The composition of the kitchen runway Samsung Galaxy A71, can not be underestimated. The presence of the Snapdragon 730G chipset is one of the main keys that makes Samsung sure the performance of the A71 does not disappoint. Snapdragon 730G itself, has the advantage of increasing graphics that are up to 15% higher than its predecessor. In addition, this processor is also designed to optimize WiFi signals when used for various live activities, one of which is playing online games which certainly affects more power-efficient use.

When tested Samsung's claim is not bragging. The combination of the okta core processor, Snapdragon 730G chipset, 8GB RAM support makes this cell phone “gajor” run a variety of activities, including when playing various online games, one of which is Garena Free Fire. The existence of AI Gaming Booster technology, provides richer experiences and makes it easier for gamers to win challenges in a game.

Battery and price
What about the battery life? Samsung Galaxy A71 has a long battery life of 4,500 mAh with Super-Fast Charging 25W. Users do not need to worry about the power out in the midst of excitement playing games or other activities. Speaking of price, as a true cellphone coming to target the upper middle class, the sale value of the Galaxy A71 cannot be considered cheap. To get a Galaxy A71, prepare a fund of Rp. 6,099,000.

Mon Feb 10 , 2020
GadgetSquad.id – Xiaomi kicked off the country's market with the new smartphone Mi Note 10 Pro. Before discussing more about the Xiaomi Mi Note 10 Pro, maybe readers already know that this smartphone brings advantages, one of which is from the photography sector with its 108 MP camera. That's not […]