GadgetSquad.id – Samsung launches its newest smartwatch, the Samsung Galaxy Watch Active 2. The smartwatch is released in two variants based on its size, viz 40 mm and 44 mm It is packed with a number of interesting features for its fans. What are the interesting features in question, just consider the following review.

Attractive and stylish, that's about the first impression felt seeing this latest smart watch made by Samsung. In form, this smart watch is formulated with a rounded format, very fitting and feels elegant when worn on the wrist.

The Samsung Galaxy Watch Active 2 has two buttons located on the right, each of which is the power / home button below and the back button located on it.

Also read: For sale at 4 million, the Samsung Galaxy Watch Active 2 has many advanced features

Armed with Super AMOLED screen technology, making the content or information contained on the screen presented sharply and clearly. In fact, when viewing it outside the room with blazing sun exposure, the information presented is still clearly visible.

For those who like to dive, this device can also be worn when they do the activity. That's because the Galaxy Watch Active 2 has pocketed IP68 certification which makes it waterproof and dust. But keep in mind, the device can only be used to dive with depths of up to 5 ATMs and last for 30 minutes, and not in sea water.

For the strap itself, the sales package is only available one and made from leather. However, for those who want to replace it is also possible, because Samsung sells its strap separately. Just choose, prefer the leather or aluminum watch strap.

Like a smartphone, this watch is also packed with a processor and other supporting components to work. In this case, the Galaxy Watch Active 2 is supported by the Samsung Exynos 9110 (10 nm) dual-core processor with 1.5GHz speed and is equipped with 768 MB RAM and 4 GB internal memory.

To be able to connect with other devices, this device has embedded a number of connectivity features, including Wi-Fi 802.11 b / g / n, Bluetooth 5.0, GPS, and NFC. 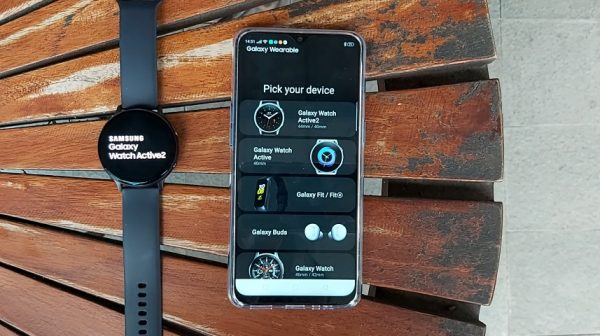 As a smart device, this watch does not only function as a timepiece. With various specifications and features that it carries, this device can be used for a variety of user needs.

Armed with Bluetooth 5.0 connectivity features, Galaxy Watch Active 2 can be connected to other devices, such as Android 5.0 or iOS 9.0 smartphones and above. To do this, we must first install the Galaxy Wearable application.

When connected to a smartphone, we can also receive notifications, both from incoming messages and phone calls. Through this watch, we can also directly reply to messages directly, either via SMS, or through other messaging applications such as WhatsApp, LINE, and so on. To make calls directly through the Samsung Galaxy Watch Active 2 can also be done. Just select the phone feature, then select the contact number on the smartphone you want to call.

In the realm of entertainment, even though the screen is not as wide as a smartphone, we can watch videos from YouTube shows, if the device is connected with internet connectivity. Apart from that, we can also enjoy streaming audio.

It is enough? Not yet. Well, of course, as a device made to accompany users to do activities all day, this device can also be used to support healthy behavior. With this device, we can monitor activities, such as the number of steps that have been taken, the duration of cycling, swimming, and various other activities. In addition, we can also use this device to count heart rates, the number of calories burned, and sleep monitors. In essence, for those who like to exercise, this device is fun enough to be a companion.

Do not stop there, still a matter of functionality offered. In the Samsung Galaxy Watch Active 2 there is a feature called Camera Controller. Through this feature, it is possible to make the Samsung Galaxy Watch Active a camera controller on a smartphone connected to this watch. To do this, simply open the Camera Controller feature, then automatically the camera features on the smartphone are viewed through this device. Suddenly, we can immediately take photos from a distance with a smartphone, which is controlled from this device. However, it should be noted to do this we are required to upgrade the Galaxy Wearable application on a smartphone first.

Fun again, this device turns out to have interesting features which can be used as a translator. Samsung Galaxy Watch Active2 can be a translator for 15 languages. This is certainly beneficial for users who like to travel abroad.

Priced at Rp5,499,000, a Samsung Galaxy Watch Active 2 watch is not exactly cheap. However, when talking about the functionality it carries, the Galaxy Watch Active2 seems quite comparable to the price of the ransom. Moreover, in addition to the features and functionality offered, in terms of the appearance of this device has also been formulated with an attractive design, very fitting and comfortable when worn.

Unfortunately, in the sales package Samsung does not include an adapter for recharging the battery. In this case, Samsung only includes a cable for charging. So, to recharge the battery, fortunately we can still use adapters from smartphones that we have.

How to Apply for Fast Unsecured Loans at Bank Mandiri

Mon Dec 30 , 2019
One of the banks recommended as a safe and easy place to save money is Bank Mandiri. To be a Mandiri bank customer the requirements and stages are quite easy. All you have to do is bring your KTP and of course what is still valid is also the amount […]